I was asked earlier whether using badges for building links is a good idea.

Its certainly not a new concept, enterprising SEO’s (myself included) had used this technique, or variants of it, for years.  In the spirit of full disclosure, I also talked extensively about this practice and my experiments in avoiding penalties by rapidly varying anchor texts, but that was a long time ago.

Most SEO’s adapted away from this technique years ago, as soon as Google started clamping down on the practice, quite rightly, as it was the very essence of manipulative spam.

10 Million Spam Links & Boasting About it:

A source pointed out to me this week that the mobile analytics site mixpanel, were incentivising their users to link to them in order to upgrade the amount of free queries per month from 25,000 up to 200,000.  Thats a pretty hefty increase to carry their badge:

At their pricing tier one, the value of those 175,000 free data points for linking to their website, using their badge, is equivalent to $52.50 per month in free usage.  Not a bad deal all things considered for including a snippet of html code in the footer of your website.

Below you can see the code snippet they require for the free monthly credit, and no mention of a nofollow attribute.  There’s also no commercial anchor text as such – although there is an image alt tag (we’ll get to this later).

How Popular has the Free Credit for Links Been?

Here’s where things get a bit interesting.  According to SearchMetrics mixpanel really don’t rank for very much at all – which would seem to indicate that Google has done the correct thing, and classified this site as a spam domain based on incoming links (an example of Penguin doing its job correctly, yay!):

For reference, an SEO Visibility score that peaked at 3,000 isn’t really that high, however there are some other pretty obvious SEO flaws in the website, starting with the basics there is no robots.txt file on the website and that’s typically the mark of a site with zero focus on organic search.

But – and this is where it does get interesting, the site is 2nd (yes, SECOND) for its primary keyword of Mobile Analytics.  The very one that’s being targeted by the alt text in the image embed they’re pushing on webmasters for fifty bucks a month.

The only site that ranks better than Mixpanel for Mobile Analytics, is Google: 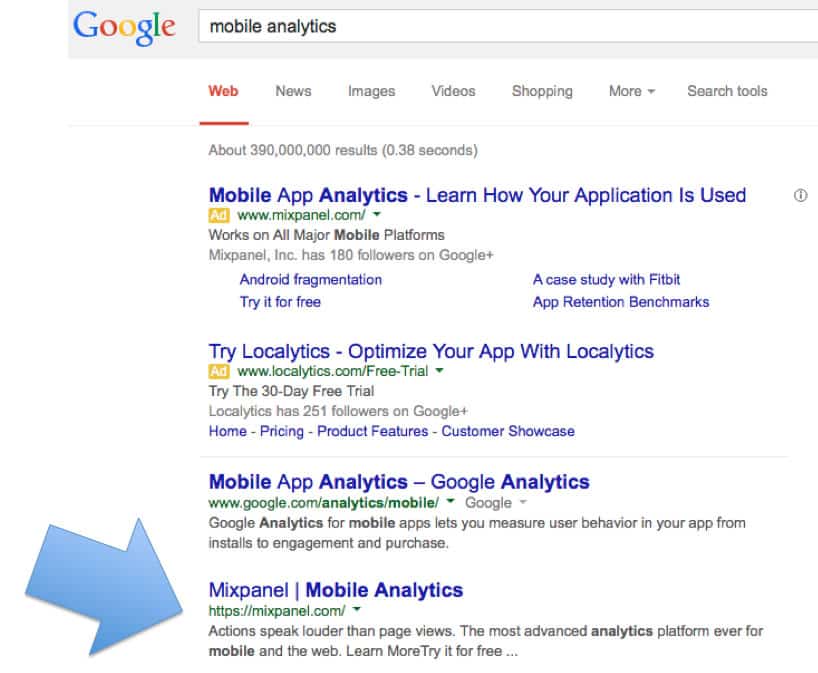 Whats this about Boasting?

The only reason this was noticed, was a post on Medium about the CEO of mixpanel mentoring startups on how to succeed, and listing badge based link spam as one of their secrets to success: 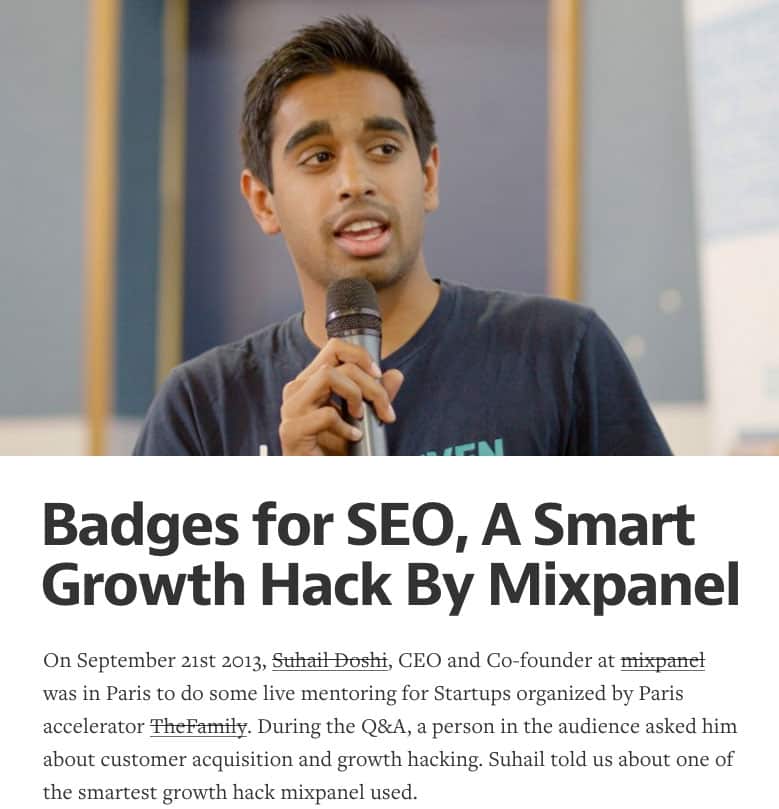 Where do Sequoia & Y Combinator Come Into the Story?

Mixpanel has received funding from both of the above funds – they are listed on their website on the about page, under “investors”.

This is only relevant as Sequoia were one of the original funds for Google, and Y Combinator also has documented links with several early google staff.  This is only really annoying on the basis that when you come from a stable where Google themselves are the thoroughbred – you really, really should know better than to blatantly spam links to achieve rankings.

Just to add to the comedy value, Paul Buchheit is listed by Y Combinator as a partner, and he is also credited as the very person who came up with the slogan “Don’t be Evil”.

So Have the Funds Protected Mixpanel?

I wouldn’t for a second insinuate that by being funded by VC’s with documented, direct links with Google have protected them from a link spam penalty – there is zero evidence to support that theory, which is frankly a bit tin-foil hat style – the article title is purely intended to be satire.

That being said though, one of the primary advantages of being in the Y Combinator, Sequoia, Andreessen Horowitz club is being able to get advice from those that have been there and done it themselves.  This kind of advice and support is designed to make their startups successful.  It is entirely possible that they (Mixpanel) HAVE been advised not to engage in this spam technique and have chosen to ignore the advice.

All things considered though, when you keep that kind of corporate company, you should probably take steps to avoid spamming.

What Can We Learn From This?

The most interesting point in the entire story, from a technical SEO perspective is of course that this would appear to be a demonstration of two things:
1) that image alt text in links is given considerable weight as anchor text, and
2) it would appear that Google is less likely to apply keyword level penalties on image alt text links.