(this is part 1 of a 3 part series on social media manipulation, hopefully.. *)

Since industrialisation introduced the need for marketing (when production and necessity were separated) – social proof has long been part of every brand marketer’s armoury.

Documented evidence as far back as the 18th century shows early marketing relying on social verification, for example extolling the virtues of the latest wonder ointment by printing success stories from “normal people” detailing the fantastic success they have had curing any range of ailments. 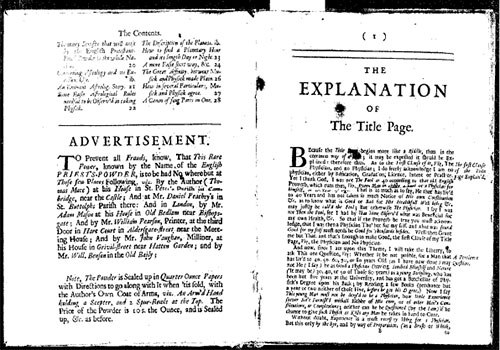 This trend continued into modern marketing.  How many of us remember the 80’s campaign for the whiskas brand “8 out of 10 cats prefer it“? 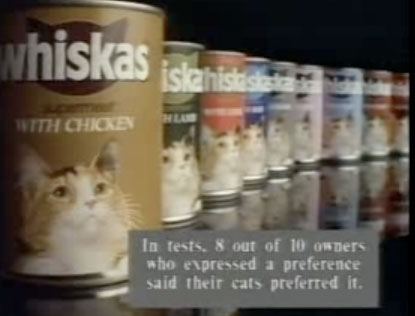 While firmly tongue in cheek, is just another side of social verification, after all, if 80% of cats do indeed prefer that specific brand then who are you to argue?

Fast forward another 30 years or so to the present day, and we arrive in the age of the internet.

Guess what, this angle is still effective, so its hardly surprising that brands big and small have continued to use it.  The primary difference being, its now through the medium of “likes”.

Even those whiskas people have moved on with the times, but instead of relying on third hand information from cat owners, they are able to manipulate their audience in social media to the same effect.

The above banner launched on Facebook is no different to what they were doing back in the 80’s, its just the medium that’s changed.

Its no surprise then that a black market in false social verification has sprung up, with people and companies offering thousands of fake facebook likes, tweets or whatever else is the social media outlet du-jour.

But what does this mean for your business? Is it worth it?  Is it likely to get found?
Will you look stupid or greedy, or is it an acceptable risk?

Consumers will assume one or both of the following, either nobody else has ever bought your product, or worse still, nobody liked it.

Neither of these are good for sales, but I come across examples of this every single day.  Social verification does work both ways, and having plenty of people liking your products is a great thing, but don’t underestimate the hit in conversion rate if it sends the wrong message.

So, you want the benefits of having plenty of likes, but you don’t have the time, inclination, or traffic to get a reasonable amount – what are you to do?  Buy them?

Pragmatically speaking its certainly an approach you could take.

Some years ago it was actually really easy to see if likes were faked just by clicking through on the number that appeared next to the button, it gave you a list of who exactly had clicked it and if a thousand people in Dhaka, Bangladesh liked a plumbers in Durham, it was pretty obviously manipulated.

This function was dropped though in 2010 due to privacy reasons though, thereby enabling the fake like industry to flourish.

Personally I wouldn’t recommend you take this route however – as its likely that the above privacy control might change or an easy to verify set of aggregated stats published at page level.

Its also possible that accounts with fake likes might get banned en-masse in future and pages that featured them may also get penalised in some form by Facebook.

What this might look like is anybody’s guess, but for a company that in any way relies on e-commerce its a short sighted strategy.

Another recent vanity metric is an individual’s or company’s twitter following.  Having a brand that nobody follows gives the impression that it has little authority, regardless of how well entrenched it is in its given industry.

This tactic however is really quite easily to pick apart simply by running the account through any number of online tools that analyse followers for common traits of bots – low social scores, low follow counts, similar creation dates etc.

The screenshots below from StatusPeople show two accounts, firstly my personal account which it reveals that 81% of my followers are “normal” while 15% are dormant, although those are most likely just people that haven’t tweeted in a while:

The tool does point out that 4% of my follower count are fakes.  For the record, I’ve never bought any followers (well not for my personal account anyway) so these are likely to be false positives that happen to match the criteria that this tool defines bots by.

Compare the above to an account which looks suspect, and you see an immediate difference:

So establishing whether an account has relied on faked or bought twitter followers is actually really easy, quick and free.  Given the trifecta I’d suggest doing this for your business is a downright stupid idea.

How do I get fans without looking stupid?

Like most things in life, Im afraid to say that acquiring things of value isn’t something you can take shortcuts on – unless you’re willing to pay top dollar.  Both Facebook and Twitter have paid options to attract likes and fans, both platforms allow fairly robust targeting.  You do pay in both though, arguably far more than they are worth at a macro level.

There are of course practices that can be adhered to that maximise your return on invested effort, I presented a whole session at A4U London last year on precisely that subject (titled: Social Media Manipulation), and I spend a long time tinkering with new ways to build social media presence…

*if there is enough reaction to this post then I will do a follow up with some actionable hints and tips to build your presence.

Leave a Comment!  Would you buy social media followers?  What are your tips to build a presence?