Im writing this post/rant as a response to the latest in an infinitely long line of “SEO is dead” posts, this one from the Guardian newspaper: 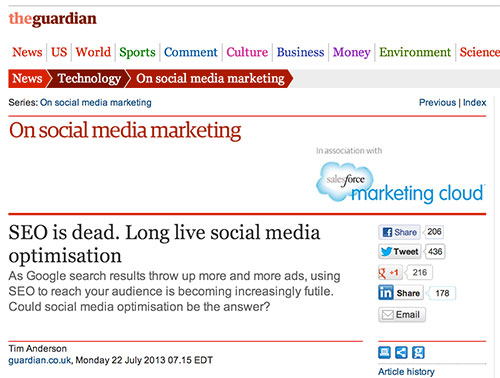 The article makes some pretty bold claims, including “Search engine optimisation (SEO) was always a flawed concept.” and “a recent Forrester report on how consumers found websites in 2012 shows that social media is catching up with search, accounting for 32% of discoveries“.

The first of those two claims is entirely subjective, the second is take out of context and highly misleading.

Yes – it is true that Social Media is expanding at a terrific rate.

Yes – it is true that executing a Social Media strategy is of increasing importance to businesses large and small.

Yes – it is true that a lot of what people called SEO was little more than manipulative tricks to fool search engines into ranking you higher.

But search is not dying

The part of the article that I have a problem with, is the assertion that social media is growing at the expense of search.  That is misleading.

Social would be beating SEO senseless if internet traffic was a zero sum game.  It is not.

As you can clearly see from the graph above, total query volume as measure by comScore in the US is still increasing significantly.  Its important noting that the above data is desktop search only, and does not include the (equal to social media) explosion in mobile search queries.

In fact, many sites I work with are fast approaching a 50/50 mobile to desktop distribution of search traffic.  Even top end estimates state that Social accounts for 50% of the traffic of search engines.

The over simplification in the Guardian article is down to this psuedo-scientific-assumption that there is only a certain amount of internet traffic to go round.  People spend more time online every year, consume more information every year, and are crucially connected by far more devices than they were a decade ago. 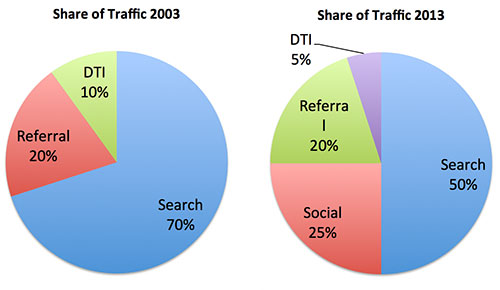 The figures in the above charts are just indicative of my point, but if you look at average traffic sources 10 years ago before Social really got going you would see something like that.

Two thirds of traffic coming from search engines, the other third being split up between direct type-in traffic and referrals from other websites.

The picture in 2013 does make it look like search has been hit at the expense of Social, but we know that isn’t the case thanks to the increasing amount of queries being returned by the search engines.

So whats fuelling this explosive growth?

Exhibit A: People spend more of their time online each year. 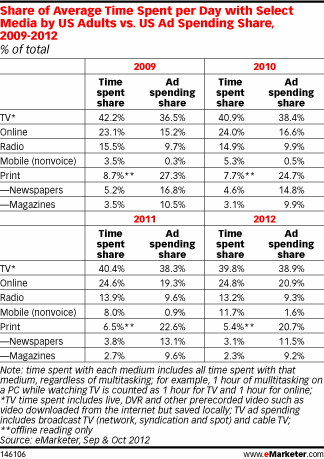 The statistics above show an increase over 2009-2012 from 26.6% (Online+Mobile Nonvoice) to 36.5% in 2012.  Those figures are just the share in time that people spend consuming these different types of media – it does not factor in the increased growth in internet penetration globally (which is a significant driver of growth in itself) so the picture is even better overall for web marketers.

Exhibit B: The internet is still growing 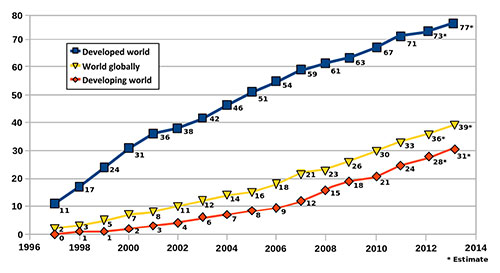 Apart from the increased amount of our lives spent online, the total number of people actually using the internet in all its flavours is still expanding rapidly.

Exhibit C: The internet is much faster, so you can consume more & search for more. 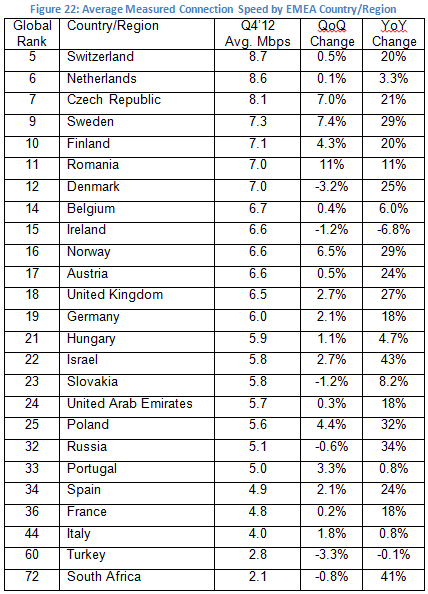 To compound the above two increases, the internet is now much quicker than it was.  Thats a no-brainer for those of us that started on dial up connections in the mid nineties, but it still plays an important role.

If you spend 1/4 of your time online, but the internet is twice as fast, it stands to reason that you’re going to be performing more searches and consuming more information.

Lets be honest about consumers intentions

The final reason to ignore the Guardian articles conclusions, is of particular importance to anyone that makes a living from an online business.

Consumer intentions are vastly different between social and search.  The chart below shows the typical consumer behaviour in the purchase funnel. 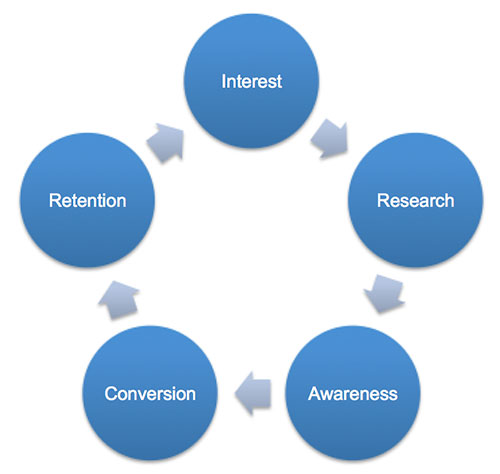 Search traffic is highly qualified, you are able to target people at very specific parts of the consumer buying cycle.  Social does not do that.
Social traffic is awesome, for product discovery.  Its not awesome at targeting people at the point in which they want to make a purchase.

Social therefore is great at getting your message out there, but when you actually want to transact, not having a presence on search engines is online marketing’s #1 deadly sin.

As always, I would love your comments and thoughts on the post – am I wrong and the Guardian article is right?  Have your say below!

79 thoughts on “SEO is dead, if you ignore all that growth”