If you’ve visited the blog before you will probably notice a few key differences today.

It looks pretty similar to the old design, and while its still a work in progress I feel the whole site is quite a bit cleaner than before.  The main difference that you will probably pick up on though is the sheer speed compared to the old version!

I launched this site using the Nevada WordPress Theme from Themeforest, which was (in my opinion) insanely pretty, but it came with some equally pretty insane overheads, mainly JavaScript.

To put it bluntly, it was slow.

Even when rigged up to an NginX CDN, Cloudflare & W3TC.

The issue was never overheads, it was the quite cool page builder functions which are great if you don’t ever want to get your hands dirty when designing pages – but the drawback is a huge number of processes required to render a page.

Enough was enough, and as of today I’ve moved onto the new Peadig Framework by Shane Jones & Alex Moss, well known Manchester based wordpress developers.

The image on the left is the embarrassing amount of resources that had to load on the old version of the site, dozens of JS scripts & CSS files that weren’t needed and certainly weren’t optimised.

It used so many files because of redundant capabilities, essentially stuff I would never use but as the theme I used tried to be all things to all site owners it needed to be heavy and bloated. 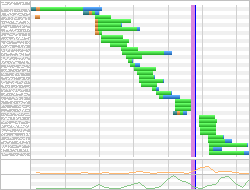 How its SO much faster:

As I’m now running a custom theme built just for my needs on a light framework, I don’t need to worry about all those extra features and I can just load whats required.

The image below is the current payload waterfall (powered by Peadig) which is much leaner and cleaner, resulting in a near 900% speed increase to the site!

If your site is powered by wordpress (and lets face it, most are these days) then pay close attention to your choice of themes as underlying speed problems should be addressed first before you splash out on CDN’s!