I’ve been contacted a handful of times over the past two years by webmasters complaining about Expedia outranking them, or for having some links of questionable value.

While I never put myself forward as the Spam Police, when you’re a high visibility member of staff on social networks, and SEO is in your job description, I guess thats understandable: 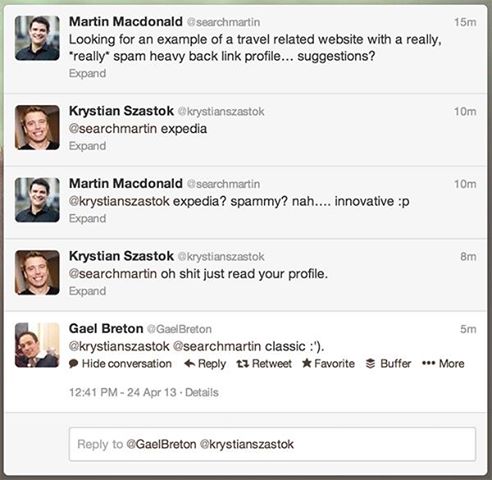 For the record: I know a lot of the Expedia brand SEO teams, they are great people, and Expedia has been a great place to work.

Sure, there are some skeletons in SEO-closets, but thats the same for every single major site that has existed for a decade or longer, bar none.

Today I received an email complaining about it, and as its relevant to the community as a whole I’m cross posting my reply here on the blog:

Thanks for your email – firstly I’d just like to reference a couple of things:

While I’m still technically an employee until January, I’m no longer in “active service”.

2) At no point did I work on any Expedia owned/branded site, my position was head of Inbound Marketing at Expedia Affiliate Networks, which involved helping big brands that contract Expedia inventory to improve their internet marketing, and notably SEO.

Aside from those points however, I totally understand your pain at brand sites being able to get away with certain things, that would  cause smaller non brand sites to get banned.

The fact of the matter is, that large sites such as Expedia brand, and these other two that you mention in your letter, have long standing history in Google’s index.

They are trusted brands which consumers have a long history of using.  They are results without which any search engines index would suffer.

A great example of what I mean is when BMW were banned for a few days for breaking the google terms of service.  Google made their point, and re-included them.  The simple fact is, if you search Google for BMW, and their site does not appear, then consumers that know nothing of SEO think that the search engine isn’t working.

Another point is that any brand which has been around for 10 or more years, which has been built using search engine marketing of course will have skeletons in their SEO closets.  While Google have really started cracking down on offenders, its unrealistic to expect them to ban every site that ever did anything wrong, they simply wouldn’t have any results left.

Yet another factor is the unfortunate prevalence of negative SEO.  If Google went and banned any site that had spammy links pointing at them now, it would be laughably simple to ban your competitors sites.

The truth, and this is coming from a long time career SEO, is that there is a pivot point of bad signals vs. good signals.  Sites like wikipedia would be impossible to attack with negative SEO simply because they have so much positive link history.  The same goes for any long established brand site, such as Expedia.

Personally (as I can not speak for Expedia), I would welcome you to post your study on gawker or anywhere else.

Publicising the SEO industry is a good thing, and while as an industry we may have a shady past, I sincerely feel enthusiastic about where we are going.

Our skill sets have evolved from analysing the index looking for shortcuts, to creating fantastic content that people are passionate about and want to share.  We have evolved from a hacker mentality, to a creative mindset.  Yes, technical SEO still exists, and always will, but there is a rich tapestry to what we do – and any effort to further publicise our industry is something I love to see happening.

So to sum it up, yes – I totally get that you’re bummed that [insert major brand] outranks you for all your key generic money terms.  It sucks, but these sites are major brands for a reason. They ARE brands.

If you want to compete in this arena, you can!  But you need to build a brand, and everything that goes with it!