Back in the late 90’s, we had a choice of search engines: Altavista, Infoseek, Lycos, Dogpile and probably others I have long since forgotten.

Then, with little warning or fanfare, a new competitor, “Google” showed up, offering far better search results, that initially baffled SEOs (an industry that was yet to be named at the time) as to how to optimize for them.

One by one, each and every competitor fell by the wayside, and we ended up in the situation we have today, where about 94% of web search traffic originates from Google, and the remaining 6% is split up between Bing and a few minor or local players.

Once it became apparent that acquiring traffic would primarily be through Google’s search engine, the webmaster community started optimizing their websites to efficiently serve their content to the giant, in order to acquire additional traffic.

This traffic is typically monetized, often using ads, and countless businesses have been born in the last 15 years – employing millions globally.  Over time, as search grew more complex webmasters were given more and more tools to provide their data to Google, in ever more structured ways.

As Webmasters were by this point, already addicted to the free traffic from Google, they continued to improve the serving of their data to search, in these ever more efficient ways.

The very process of providing this data, for free in exchange for traffic,  enabled Google to morph from the Search Engine they were, into a new product: an Answer Engine.

From March 2018, Google started removing search results from certain queries where they specifically feel they can answer a consumers query, without sending that traffic to a third party website.

Right now, example queries that no longer return real results include (but may not be limited to): 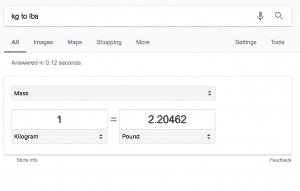 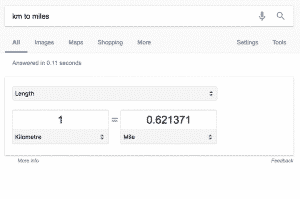 and interestingly, while these searches don’t trigger third party organic results, they DO trigger ads: 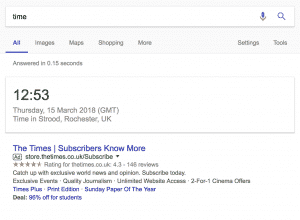 This has been done to improve the speed of results returned to the users, as confirmed in this conversation with Google Search Liaison Danny Sullivan: 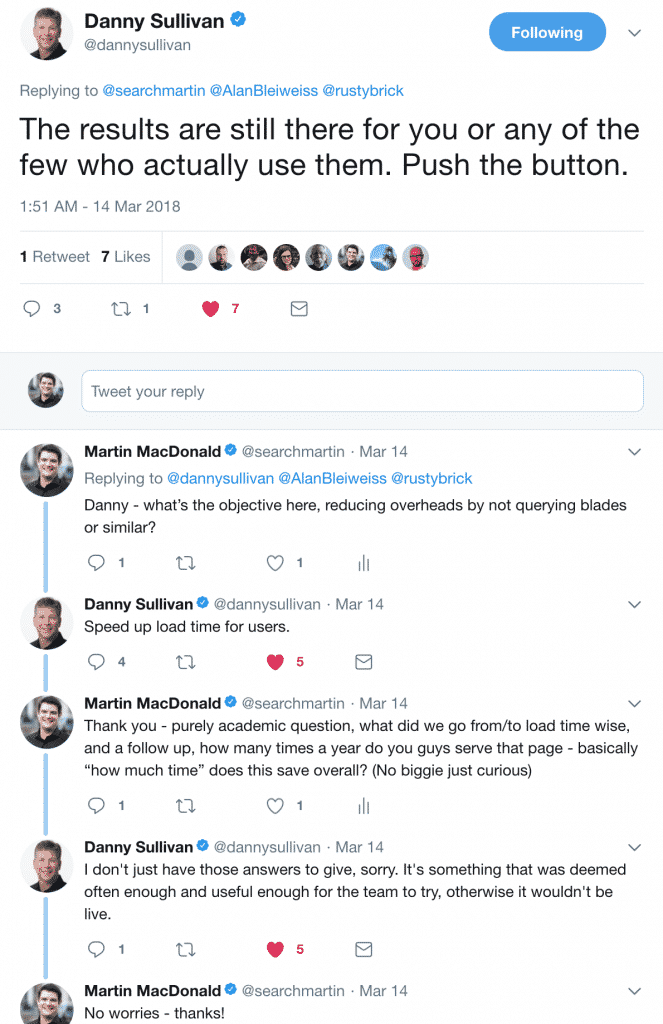 Im a User, I just wanted that Result, so Whats the Problem?

Lots of people got back to me over the past couple of days on twitter to say exactly that – and there is an undeniable logic in the argument:  if a user is searching for the time in a different city, why not just show them the time?

The problem is, many companies will go out of business off the back of this change.  Right now, the domains that rank for times, dates, calculations and so on, will lose almost 100% of their organic traffic overnight.

These companies exist by way of selling advertising, and attracting free traffic by providing information thats useful to the consumer.  Its possible, if not likely that tens of thousands of jobs might be put at risk by this seemingly minor improvement to usability on Google.

The ones that look most at risk include:

Over the coming weeks and months it will be interesting to see the impact on these individual domains.

These results are not typical of a search engine, they are however typical of an answer engine.

This has of course been tried before, and already exists in the shape of Wolfram Alpha – which unsurprisingly does an excellent job of answering all these questions. 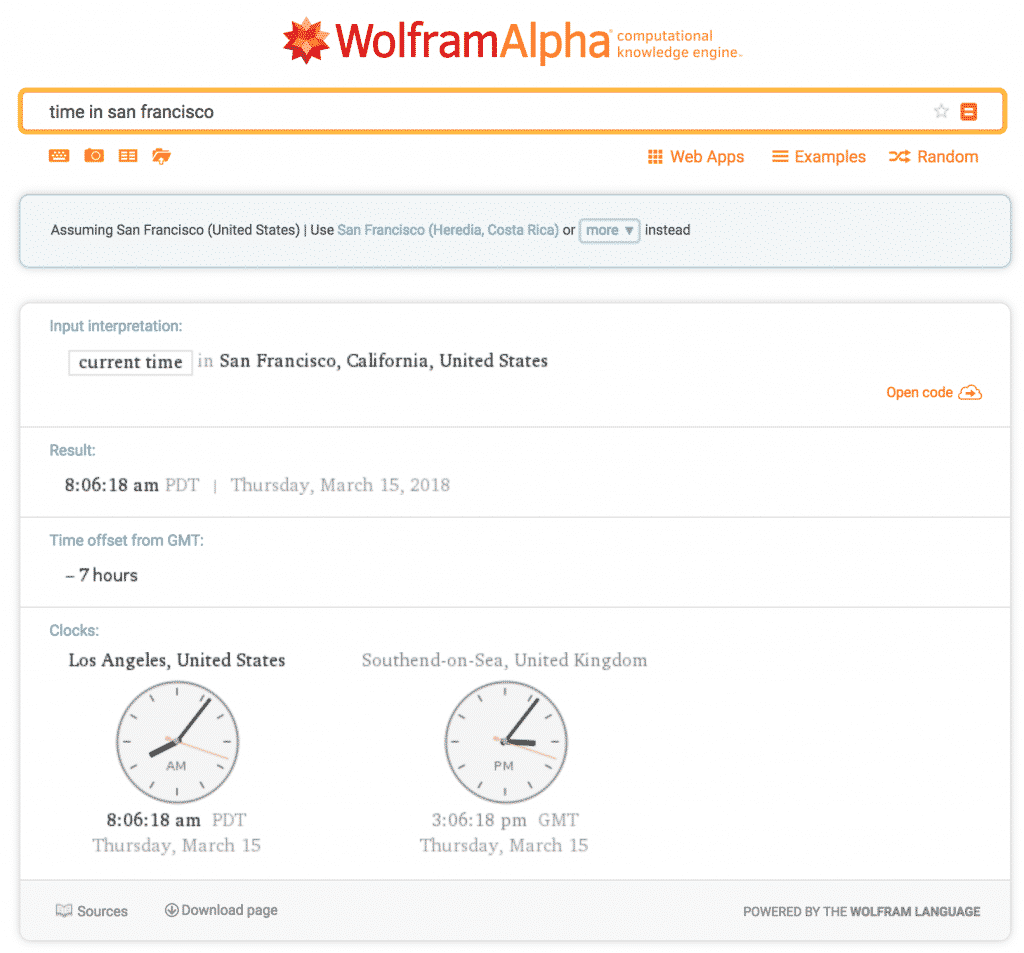 If the integration ends here, with just these time, date and units of measurement calculations, then the fallout will be limited to just the type of company listed above.

I put forward though, that this isn’t likely:  Google have a habit of developing features they deem to be useful to the user, so what’s next?  Sports Scores?  The Weather? Directions?  Maps?  You have to wonder if eventually, the game plan is for Google to serve their perceived answers to questions universally,  rather than links to other websites.

Imagine a world where you don’t “Google” stuff for links, rather you “Google” something to buy it directly from Google,  they’ve already aggressively tried this in the Financial marketplace, and recent developments certainly point towards them trying it increasingly in Travel.  That is just of course just two (albeit very large) industries, but where will this end?

The reality is, there are countless verticals and jobs that could be disrupted significantly if Google decide to just put data points up instead of search results.

Can we Do Anything to Stop This?

While in reality the answer is “no”, we can at the very least voice our disapproval to Google.  If you value traffic from Google, voice your opinions directly on twitter to @searchliaison or just RT the message below:

On behalf of SEOs, I kindly request to @searchliaison that they stop removing search results from specific search queries.

While this may improve page load by 0.25 seconds, thats a price worth paying to not destroy many companies, affecting their staff and families.

HAVE YOUR SAY BELOW: AM I TALKING RUBBISH?
ARE YOU ALSO CONCERNED ABOUT GOOGLE?
LEAVE A COMMENT!

UPDATE:  Danny Sullivan has responded on Twitter about Google’s intention to look at this treatment (thanks Danny, appreciated!):

I've said elsewhere that we'll look at the time example. I've also said that we're taking all the feedback in from the experiment to consider it. It's being heard and flowing back into the team.

We're not doing this for weather. I totally get the slippery slope concern around this issue. I get it freaks SEOs out. I also would stress again it's being tested for these specific cases where most people do not go past what's shown. Weather needs can be deeper than that.