Please check the end of this post for some final notes, following communications with Google.

“webmasters are forced to police their own links through webmaster tools, and be in constant fear of negative SEO“

Rand goes on to call on webmasters help to prove or disprove the theories:

1) Negative SEO is in fact possible.
2) It’s become much easier since the Google Penguin updates.

Just a few days ago at SMX Advanced in Seattle, Google’s Matt Cutts was asked outright about Negative SEO:

As you can hear for yourself in this short clip, he clearly says that Google are aware people are worried about it, but doesnt admit its something thats possible.

Having seen various cases – I can save everyone the time and effort of testing this statement:

So just how long has this been an issue?  Turns out that’s pretty simple to work out.

Google used to do their best to discount spam links, by not passing PageRank through links it deemed to be manipulative.  That system was far from perfect however, as enterprising SEO’s simply used to build 10,000’s or even millions of links – those that passed equity were great, whil the ones that didn’t never caused much of an issue, as they were for the most part devalued. 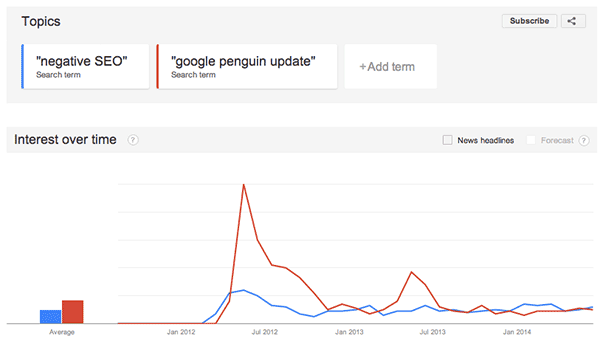 Then Google released their Penguin updates with much fanfare, proclaiming for the first time that they would be taking strong punitive action against sites with spam links.

With that, an industry was born – as you can see from Google Trends above.

But how can I be sure it exists?

About a year ago, a friend of mine got in touch as the rankings on his site had collapsed, and wanted me to do some consultancy to work out why.

The owner of the site isn’t an SEO, nor had previously engaged in any linkbuilding – he didn’t need to, as his primary domain was a perfect exact match domain for the keyword being targeted.

Qualitatively speaking, the site wasn’t exactly wikipedia, but nor is it a spam site either.  It had also ranked somewhere in the top 3 positions for its primary keyword for many years.

Lets say the keyword being targeted was “blue widgets”.  The site targeted was called “bluewidgets.com”.  It went from 3rd, down to 50th for that keyword, a position where it remains, over a year later.

Quite a lot actually, according to MajesticSEO 264,849 total links to be exact: 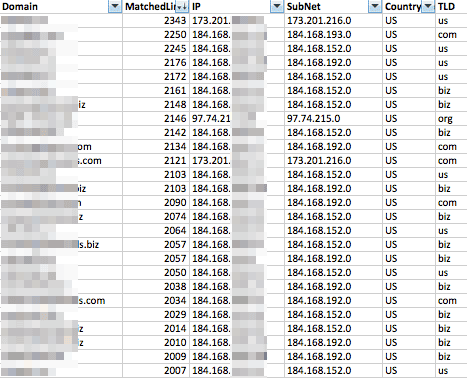 The screenshot is sorted by the total number of matched links on each of the negative SEO domains.  Every single domain was owned by the same person, WHOIS data was not obfuscated in any way, so at least I knew who the aggressor was.

You can see by the subnets that the entire set of sites were all hosted on subnets owned by GoDaddy:

Every one of the sites were identical, using the same “theme”, although were custom coded using ASPX – not wordpress which you would probably expect.

Each site also had between xx,xxx and xxx,xxx pages indexed in Google.com.

The links appeared in a random rotation on a large percentage of the pages, in two locations, either in the sidebar navigation or in the footer: 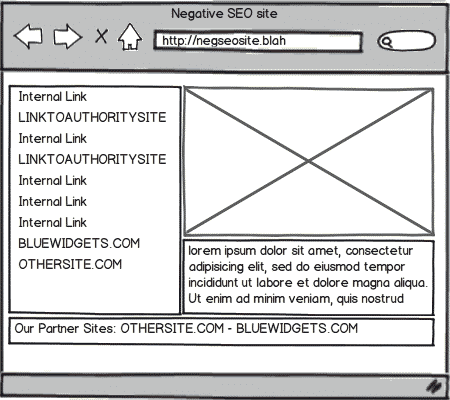 The links did not appear on every page, nor did they appear in the same place on every page.  There were also a number of other external sites linked to, both within the spam network identified by the IP subnet footprint, and various other sites within the target vertical & authority sites.

How bad was the drop?

The site only ranked for a couple of queries, all related directly to the subject of its EMD, like “blue widgets”, or “buy blue widgets” etc.  It dropped to 50th for its primary keywords – which are high volume, very commercial and expensive (CPC) terms.

It hasn’t recovered yet.

Why am I positive the negative SEO worked?

A random conversation with another SEO consultant a few weeks later provided the slam dunk evidence I needed:

Me: “I’ve seen what looks 100% like a negative SEO attack recently”

Other SEO: “Yep, I’ve seen one a few months back, certainly looked like it to me, what keywords were targeted?”

Me: “The keyword was Blue Widgets, and the site was bluewidgets.com”

Other SEO: “No WAY! My one was Blue Widgets as well, but the site was widgetsblue.org!”

We went on to compare notes in detail, some of the domains were indeed the same, but even the ones that were not shared the exact same WHOIS data as the ones I’d seen.

We knew the links shared the same anchor text, we knew the person was the same.  We also knew that the impact had been the same thanks to the SearchMetrics data.  I still have screenshots of all of the evidence, and these sites STILL exist (mostly).

We now had two confirmed cases, where one person/group had managed to remove two independent sites from the same search query.

Why have I obfuscated the data?

To be blunt, I’m very concerned about outing the perpetrator fully – for fear over suffering a similar attack myself.

I advise people to keep a close watch on their backlinks, and there are a number of good services that assist with this as well.

I’ve already reached out to Rand to share the data, and if your name is Matt Cutts, I would also be happy to provide you with all the analysis I did back then – in the hope that the affected site will finally be returned to its former position.

At the time I also shared some intel with a group of trusted other SEO’s I often communicate with in circumstances like these, so there are a few others that can verify the data – but Im not going to mention the guys name right here on the blog.

I’m worried: can you take a look at my site?

Sorry, I don’t offer 1:1 consultancy, but if you post a thread on the SEO forum here on this site, I’d be more than happy to have a quick look & suggest who you should speak to to get assistance, or what steps you can take to resolve the issue.

After several weeks of communication with the webspam team at Google – I am content that other underlying historic reasons may have been to blame for the catastrophic loss of traffic to the site in question.
I would like to thank the webspam team and Matt Cutts personally, for reacting and spending the time and energy required to look into this case specifically.