Another day, another flip-flop from Google on the functionality and specification of nofollow…  Lets look back at all the times it hasn’t changed in the last decade:

Here’s the original definition, as reported:

We later found out that point (1) in that list wasn’t strictly true, Google still used the nofollow links for URL discovery (ie. they did technically ‘follow’ the link, even though they never passed PageRank.

Again, reported by Danny (you really couldn’t make this up), Matt Cutts announced contemporaneously at SMX Advanced that PageRank sculpting by way of NoFollow no longer worked: 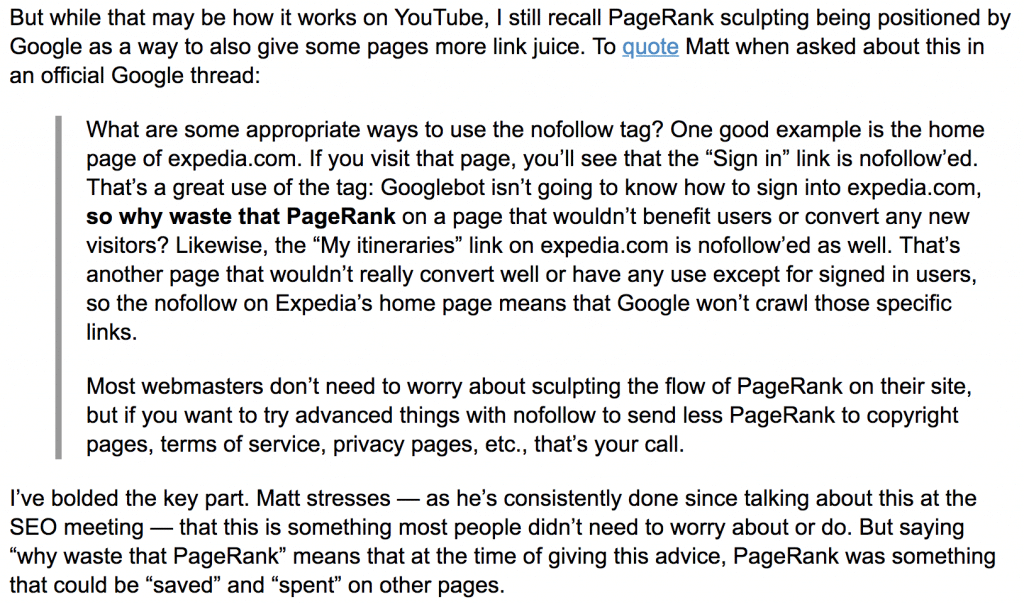 I’ve tried to check the original thread, but it has since been deleted (or my access has been removed, take your pick), luckily Danny recorded it for posterity on the article linked above.

It’s pretty fair to say though, that the wording here explicitly confirms that a followed link to a page on site that is of low search value, is “wasted”.

Furthermore, Bruce Clay managed to record some Q&A with Matt following his session at SMX, I’ve highlighted the bit about changes:

March 2018: Google Announce NoFollow is the Same as its Always Been:

At SMX West last week, Nathan Johns, Google Search Engineer announced in a session that NoFollow has always remained the same since its inception:

I’d just like to point out, this probably IS A SURPRISE to most people that may have taken Google at face value over the years as to the definition of PageRank.

Some may argue that this is a minor detail, that NoFollow definitions are only to do with spam links, and that if you payed attention to Matt Cutts five years ago, you would have abandoned PageRank Sculpting anyway – but here’s the thing:

Back in 2015 this topic came up (again), and Matt Cutts confirmed that it still didn’t work, and that people investing time and effort into ferrying googlebot and PageRank round their sites were essentially wasting their time.

This has never been true, at least of enterprise sites with bucketloads of accrued link equity (like, the sites Ive worked on throughout my career).

I even wrote a piece about it back then (Yes, PageRank Sculpting Still Works), and that logic still has not changed:  in an environment where PageRank is divided between links, removing some of those links ultimately results in increased PageRank being assigned to the remaining links.

What Should SEOs Do About PageRank Sculpting in 2018?

Based on all my experience, (including the last ten years of running SEO on some of the largest sites online, attracting millions of organic visitors per day):

I will continue to strip out inefficient links from site architecture, siloing content together and reducing the total number of navigational links required to access all the pages, and benefitting from being able to direct PageRank as I deem most efficient for both surfacing new content, and passing PageRank into deep URLs.

All I can do, is suggest you do too, and not take Google’s word for granted on these matters.  Do your own testing, make your own mind up.

I’d love to hear your comments below!  Do you think it’s changed? Should Google get their Messaging Straight?