German discount supermarket chain Lidl is sponsoring a trend on twitter in the UK today, using the hashtag #LidlSurprises – so what could possibly go wrong? 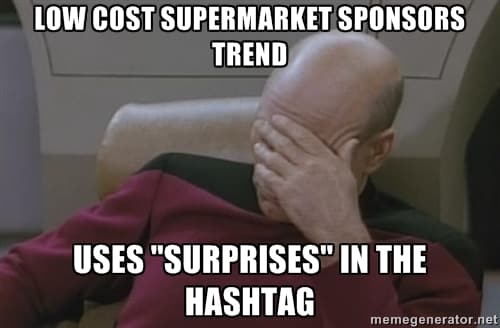 Lidl normally do a good job advertising, and the TV campaign that this sponsored trend is backing will no doubt be high in TVR spend – meaning those of us in the UK will see it most nights for the foreseeable future.

If I were managing social media at a bargain basement supermarket chain with national reach and recognition, I’d probably want to err on the side of caution on this one.

Twitter is a fantastic platform for social magnification and viral campaigns – its not however a great platform for controlling the message you want to portray.

As you might expect, amusing tweets are flooding in, here’s a selection:

Buy what you want, just don't be seen with the bag in public #LidlSurprises

#LidlSurprises it's not the meat you think it is

It's a dog-eat-dog world.

Especially when you buy your pet food at Lidl.#LidlSurprises

Any marketing manager before shelling out a reasonable amount of money, particularly in a very high visibility medium must be to perform a full SWOT analysis on any such media buys, social media included.

Presumably Lidl didn’t do this pretty fundamental analysis, so to save them time here’s an example they can use internally:

What Can Brands Learn From This?

For goodness sake brands, please stop sponsoring trends that allow even the slightest chance of it being hijacked for hi-jinx!  I assure you the twitterverse will find a great way to make you look stupid.

If you can laugh at yourselves (I’ve a feeling Lidl probably can) then its not so bad – especially as your perceived social media faux-pas might get some headlines, but unless this was made clear as a potential goal internally in advance of the campaign, you’re going to have a rough day.

Providing the social media team/agency did advise that this was the likely outcome, and the brand signed off on it, then its likely to be a success in terms of visibility and followers.  Who knows, maybe Lidl are in fact just trolling us on this one!

Whoever paid for #LidlSurprises promotion is either new to social media, or has a strong stomach. This will get messy ?

One things for sure though, by tomorrow their SEO team will be happy with that link from Buzzfeed UK…